As part of the MA in Language Documentation in the Endangered Languages Academic Programme (ELAP) at SOAS, students are able to participate in a two-week fieldtrip to Guernsey, Channel Islands, to undertake first-hand fieldwork and document the local highly endangered indigenous language Dgernesiais (or Guernesiais). The fieldtrip is organised by Julia Sallabank, Lecturer in Language Support and Revitalisation (who was born on Guernsey and has been conducting linguistic research there since 2000), in collaboration with Jan Marquis, Guernsey Language Development Officer. This trip follows the highly successful Spring 2009 fieldtrip when 75 language speakers were interviewed and 50 hours of audio and 10 hours of video recordings were made. This year six students are undertaking the fieldtrip, partially supported by scholarship funds from the Foundation for Endangered Languages (FEL).
Today there are probably only 200-300 (mainly elderly) fluent speakers of Dgernesiais, all aged over 60. The language is a variety of Norman French and is not mutually intelligible with Parisian French. Due to former negative ideologies (which contributed to its endangerment) Dgernesiais has been considered to be a ‘patois’ or ‘dialect’ of French; it has no separate ISO-639 code but is listed under French (fra) Ethnologue erroneously gives the name as a dialect of French spoken in the United Kingdom; in fact, Îles d’la Manche (The Channel Islands)are a British Crown Dependency and are not part of the UK (or the EU for that matter).
During their time in Guernsey the students have the opportunity to practice their fieldwork and language documentation skills (including recording, transcribing and annotating texts recorded on audio and video) and to learn about local customs and cultural activities. They also participate in outreach activities, including interviews at the local BBC radio station. 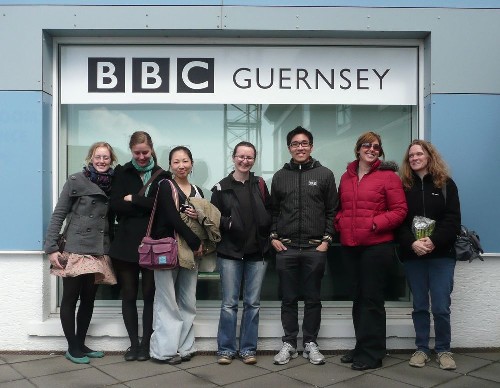 This year we have added a focus on meta-data and meta-documentation (documentation of the documentation), and as part of this the students are taking turns to contribute to a fieldwork blog where you can read about their research and other adventures.