[ update 6/12/2010: some missing links now added ]
It is by now well known that around half (or possibly more) of the world’s 7,000 languages are endangered and under threat of disappearance during the current century. Perhaps less well known is that many languages that are not (yet) endangered show certain genres, or ways of using the language, that are endangered in that there are few people who can perform them and occasions for their use are diminishing. We could refer to these as “endangered genres”. (Doing a Google search on “endangered genre” turns up things like “English language programmes are an endangered genre on Singapore television” or “westerns are an endangered genre of movies” — you won’t find much of linguistic relevance).
One such endangered genre is a literary tradition practised by the Sasak people of Lombok, eastern Indonesia, of writing on the dried leaves of the lontar palm (Borassus flabellifer), or, since the 1970’s, on paper. The lontar manuscripts are written in Kawi, a form of middle Javanese, or Sasak, or a mixture of both. The manuscripts are read during performances which must involve several readers and an audience. Historical evidence suggests that this writing and reading tradition originated from contact between the Sasak and their westerly neighbours the Javanese and Balinese, who dominated various parts of Lombok at different times from the 17th to the 19th centuries. In a paper just published in Volume 8 of the journal Language Documentation and Description I discuss the tradition and argue that it is now endangered as there are probably only 100 people (among a population of 2.5 million) who can read the manuscripts, and performances are discouraged due to cultural associations which conservative Islamic groups on Lombok do not approve of.
The Makassarese people of south-west Sulawesi have a similar literary tradition which they call lontara’ (which is also the name for the script used to write Makassarese and several other Sulawesi languages, including Bugis and Mandar). There is a separate old Makassarese script which was used to write lontara’ before the Bugis script replaced it in the late 18th and early 19th centuries. There are collections of Makassarese lontara’ in the Netherlands, Jakarta and the National Archives of South Sulawesi (written in both old Makassarese and Bugis scripts), most of which have been microfilmed and catalogued, but are deteriorating. Last year the South Sulawesi government is reported to have allocated IDR 500 million (about USD 55,000) for the preservation of ancient lontara’ in the Archives.
Anthony Jukes of the La Trobe University Linguistics Department has been working on Makassarese for many years and he found that many of his consultants living in the city of Makassar knew of the Makassarese lontara’ and that a small number of them could read manuscripts written on the Bugis script (quite a few scholars and specialists in the city are still good at reading Bugis lontara’ in Bugis script). No-one is able to read lontara’ written in the old Makassarese script.
Anthony was recently awarded a small research grant by the Endangered Archives Programme run by the British Library to investigate contemporary use of lontara’ and to identify whether there were any additional manuscripts held in private hands which might be able to be photographed. He is currently in Sulawesi and reports by Google chat that in a village outside the city he has found:

“quite a few. In the kampungs people still write them. I found a lot from the 1950s onwards, written in exercise books in ballpoint pen, and a few that look like they are over 100 years old. Mostly they are writing them as information, to be read individually: histories, myths, mysticism, calendars for planting etc. I recorded some performances of people reading yesterday. I’m also making a few sample images and generally testing willingness of people to let them be photographed.”

This is an exciting discovery and suggests that further research in collaboration with local scholars may well reveal a wealth of new material, as well as opportunities to document both the manuscripts and reading and writing performances.
One interesting aspect of Anthony’s research is that he is using his personal Apple iPad to display photographs of lontara’ in old Makassarese script from Dutch collections — the iPad is ideal in that it has long battery life and enables easy and rapid access to images, as well as zooming in to parts of them. He writes:

“I showed some of the old men the old manuscript pictures on my iPad. One of them, Daeng Tiro, had never used a computer or even a mobile phone before, but he got how to use the iPad in seconds. He was piching, twisting, scrolling etc. like a pro. Steve Jobs would have been proud” 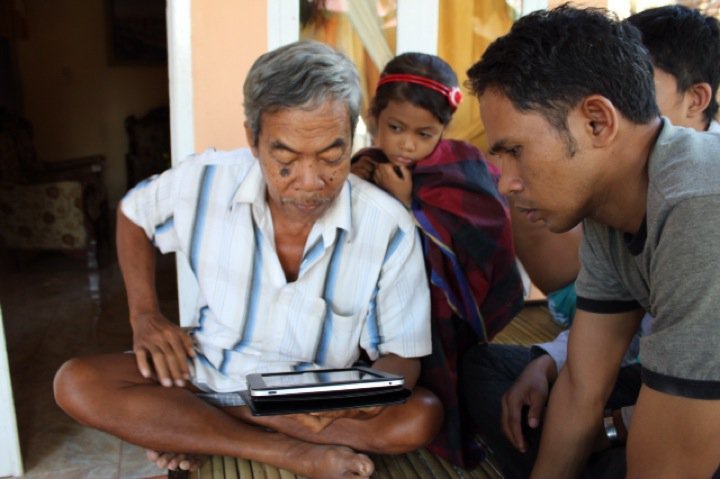 So, the latest technology meets an endangered genre and a pilot project turns up exciting new material and potential opportunities for documentation, preservation and research.

Note: Many thanks to Anthony Jukes for reading and correcting an earlier version of this post and for sharing his experiences and photographs.