The Trace Foundation is a New York based non-profit non-government organisation that has been working with Tibetan communities in China since 1993, mainly on education, health, rural development, and culture. The Foundation offers grants in these areas, and hosts the Latse Library of Tibetan materials at its home base in Greenwich Village in New York City.
Over the past two years Trace Foundation has organised various events, both exhibitions and lecture series on a range of topics, including minority and endangered languages, especially Tibetan. The series has included the following language-related symposia:

On 20-21 November 2010 the sixth and final symposium called Alive & Digital will be held, bringing together scholars and experts who have worked extensively on minority language preservation and new technologies. The main topics to be discussed are what technological breakthroughs lie ahead and how technology today is impacting linguistic minorities worldwide. The first day will involve a diverse group of speakers discussing past and present trends in the relationship between technology and language, and the second day will explore technological issues specific to the Tibetan language including the Tibetan font converter, Unicode, and iPhone applications.
This event is free and open to the public, but registration is requested. 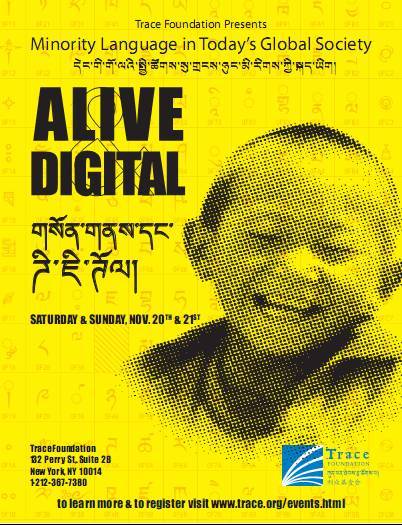