About 18 months ago I wrote a blog post about potential sources of funding for endangered languages research. I identified three main types of funders: governmental grant bodies, non-governmental grant bodies, and endangered languages grant bodies. The Endangered Languages Documentation Programme (ELDP), which is a sister to the Academic Programme (ELAP) and the Endangered Languages Archive (ELAR) at SOAS, is one of the largest in the last category, distributing around GBP 1million per year in competitive grants.
As part of my current interest in meta-documentation, that is the documentation of language documentation (see this recent conference abstract, and a differently focussed workshop abstract [.pdf]), I have been looking at how granting agencies, and ELDP in particular, spend their funds. Where is funded research being carried out and where is the money being allocated to? Are there any changes over time that can be observed?
I chose to look at ELDP because it has global coverage in terms of the research areas it is interested in and in terms of which researchers it is prepared to fund. It also publishes information about the grantees and the size of the grants awarded, so data collection is easy. Volkswagen Foundation, in contrast, requires a German component in their DoBeS projects, while NSF-NEH Documenting Endangered Languages (DEL) grants are restricted to US Institutions.
I wish to make it clear that although ELDP is administered by SOAS staff, its grant decision making processes are entirely independent of SOAS and are carried out by an International Panel chaired by Andrew Spencer of the University of Essex. The opinions I am expressing here are also independent of ELDP itself.

An examination of grants awarded by ELDP from 2002 to 2009 (the figures for the 2010 grant round are not yet available) reveals some interesting trends. In the 8 year period ELDP awarded 193 grants worth GBP 7.3million (at an average of GBP 37,000 per grant, though they range from GBP 1,436 to GBP 128,188, with 77 (40%) valued at GBP 10,000 or less). If we look at geographical distributions, in terms of number of grants awarded, most went for work on languages located in Central and South America (53), followed by Asia (38), Australia-Pacific (35), Africa (31), North America (15) and Europe (15). In contrast, the location of host institutions to which the grants were paid reveals an almost opposite distribution: Europe (80), North America (64), Australia-Pacific (24), Central and South America (14) with Asia (9) and Africa (4) well behind. The following bar chart shows this (red bars show where the host institutions are located while green bars show where the languages being documented are located). 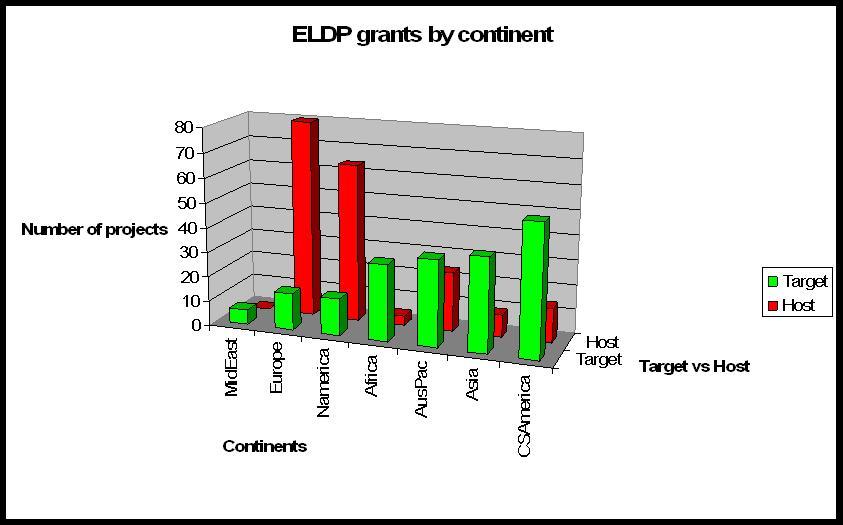 If we look at the geographical distribution of the value of grants awarded, the figures are even more skewed. European host institutions received GBP 2.85million (40% of the total), and North American institutions GBP 2.15million (30%). The remaining 30% was very unevenly split between Australia-Pacific at GBP 1.16million (16%), Asia GBP 483,000 (7%) and Africa with GBP 138,000 (2%). In other words, 16% of ELDP grants have been allocated for work on African languages but only 2% of the funds awarded went to African institutions. For Asia the situation is slightly better: 20% of ELDP grants were for Asian languages and 7% of the funds have gone to Asian institutions. This bar chart shows the value by continent for host institutions (red bars) and regions where the languages are spoken (green bars): 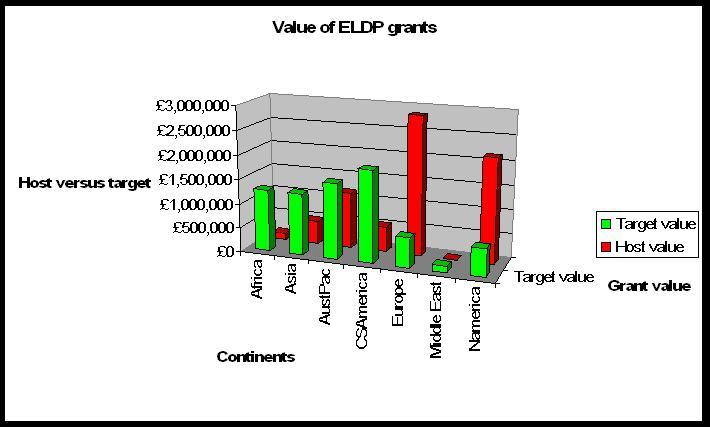 I have not been able to analyse the figures over time fully yet but my impression is that African, Asian and Latin American based scholars are showing more success in recent funding application rounds than they did back in 2002-2003. Whether these trends might continue into the future will be interesting to watch.

2 thoughts on “Where does the dosh go?”