I just received copies from the publishers of a new book that may be of interest to readers of this blog. It is called 1000 Languages: The Worldwide History of Living and Lost Tongues and is edited by yours truly. The book was published by Thames and Hudson in the UK and associated countries, and by University of California Press in the US. It is available on UK Amazon, or readers in the UK can get it for an even cheaper price via the Tesco on-line store. 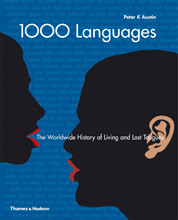 The book is issued in hard cover and runs to over 300 pages and includes over 400 colour illustrations, a series of maps, a glossary of linguistic terms, and a list of references. It is organised topically by geographical regions and each chapter explores the sources, interrelationships and characteristics of that region’s languages, including the major and minor ones of the area. It includes chapters on the topical issues of endangered and extinct languages. Each main entry details numbers of speakers, geographical spread, growth, development and key features of the language. The following is a list of the chapters and authors: