During the recent federal election we frequently saw one of the most peculiar exceptions in Australian spelling practice, the name of the Australian Labor Party, where Labor is spelt without a u even though most Australians would include a u and write this word as labour in every other context. Although the spelling of the name of the Labor Party is exceptional today, it is not an isolated aberration but is rather one of the last remnants of variation that existed in spelling practice in Australia in the late nineteenth century and early twentieth century but which has since disappeared. There may have been social and political factors that drove this variation but today the story that lies behind this variation is very difficult to piece together.

In standard Australian spelling today there is a set of words of Romance origin that end in -our, such as labour, colour and valour, and another set of words of Romance origin that end in -or, such as posterior and tremor. This division in Australia follows modern standard British practice, which is in turn based largely on the spellings laid down by Dr Johnson in his dictionary of 1755. Dr Johnson was following the convention of his time of distinguishing between words that had been borrowed into English via French by spelling their endings -our and those that had come into English directly from Latin by spelling their endings -or. However, in the eighteenth century there was a great deal of confusion over the exact source of many words and so there was a lot of inconsistency among authors in the spelling of these endings. Later, in the nineteenth century, Noah Webster devised a series of reforms to make English spelling more consistent. One aspect of English spelling that he targeted was the distinction between -our and -or. He regularised all words to the -or spelling, giving rise to such forms as labor, color and valor (Peters 2007:580-581).
The usual spelling of the common noun labour with the u in Australia follows traditional British practice, while the spelling Labor in the name of the Labor Party follows the reformed spelling of Webster, which has been adopted as standard in the United States. The official Labor Party line on why the name of the party follows Webster’s standards is that the spelling was adopted in 1912 under the influence of the American labour movement. But the spelling of the name of the Labor Party is not an isolated case. In the late nineteenth and early twentieth centuries ‘American’ spellings were quite widespread in Australia. In Victoria they persisted well into the twentieth century in some quarters. Pam Peters (personal communication) has reported that the Victorian Department of Education endorsed the reformed -or spellings up until the 1970s and the Age newspaper used the reformed spellings up to the end of the 1990s.
In New South Wales the former co-existence of the reformed and the traditional spellings is most visible today in World War I memorials, since they were built at a time when the variation was current and they often make use of the words honour and valour, which are subject to the variation. An example of a u-less spelling for honour on the World War I memorial at Mt Wilson is shown in the picture below. Images of the text of many other war memorials that exhibit this variation can be found at the Register of War Memorials in New South Wales. 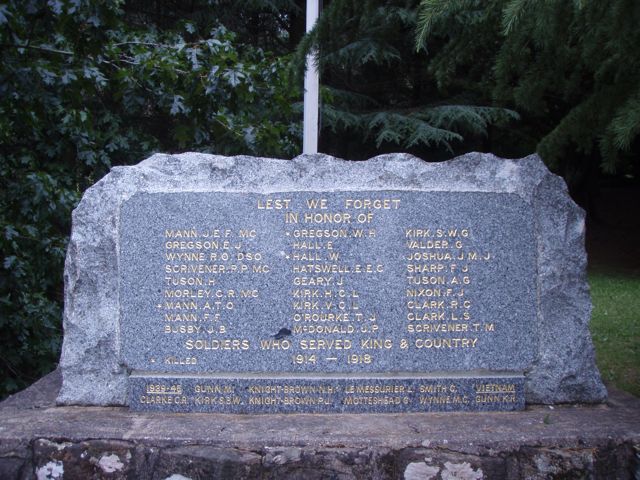 David Nash (personal communication) has pointed out that reformed spellings are quite visible in place names in South Australia. He raises Victor Harbor, the name of a harbour and a locality in South Australia, as an example. The ‘other details’ supplied by the South Australian Gazetteer for the harbour and locality say that they were originally called Port Victor but that the name was later changed to avoid confusion with Port Victoria. The never inaccurate Wikipedia claims that the name change was made in 1921 and that “[t]his spelling, found in several geographical names in South Australia, including Adelaide Outer Harbor, is said to reflect the use of American shipping charts by the State Government in the late 19th and early 20th century.” This is a plausible hypothesis, but there is no evidence offered to support it. Even the author of this text does not seem particularly confident in the claim, hedging it with ‘…is said to…’ It is more likely that the u-less spelling of harbour reflects the general use of reformed spellings in South Australia at the time. South Australia may have been particularly advanced in this regard – David Nash points out that all place names that contain harbor spelt without the u listed in the Geoscience Australia database are in South Australia.
Pam Peters (personal communication) has attributed the use of the reformed spellings to the widespread availability of Webster’s dictionary and the lack of a good alternative in Australia at the time. She believes that the British spellings only gained in popularity in Australia in the 1920s and 30s as a result of the appearance of the Concise Oxford Dictionary. Annette Potts, in an online article, presents a similar case: she claims that the reformed spellings were adopted because of the popularity of Webster’s dictionary.
The historical presence of this variation and its subsequent disappearance raises many questions to my mind. How did people choose which set of spellings they would use? Did a person’s choice of spellings say something about their class or education or their political views? It is possible that non-professional writers would have simply bowed to the spellings in whatever reference book was readily available, and if that was Webster’s dictionary then they would have used his spellings. It is hard to believe, however, that professional writers would not have been aware of the possible variants and made a conscious decision of which variants to use. Webster thought of his dictionary-making efforts in part as nurturing the new and unique language of the United States, a new and unique nation in the world. This aspect of Webster’s work was surely not unknown to those who made use of it in Australia. Indeed, Webster mentions his goals in the preface to the original 1828 edition of his dictionary, which is reproduced in the later editions. Perhaps those who chose to follow Webster’s reforms were at least partly making a political statement in favour of new nations and railing against British tradition.
It would be interesting to know precisely how the variation disappeared and the British spellings came to completely dominate. Australians today are generally quite unaware of the historical variation. When I was photographing the war memorial shown above another person there commented to me that honour was spelt wrong. The author of the Wikipedia text quoted above could not imagine that an Australian would have used the reformed spelling for harbour but instead presents the hypothesis that the spelling must have been adopted from American charts. I have frequently encountered the attitude that one set of spellings is American and the other Australian and that is that. How did the variation disappear and why is there little acknowledgement of the past variation today?
Extra-digital references
Peters, Pam. 2007. The Cambridge guide to Australian English usage. Cambridge: Cambridge University Press.

13 thoughts on “Webster in Australia”